What I always tried to find out was the relationship between the Treasure Ship (takarabune) with the Seven Lucky Gods (shichifukujin), and the Ship Stone (funaishi).

Now that I stuck at home, I have time to investigate!

Let’s start with a more or less short explanation of these three: 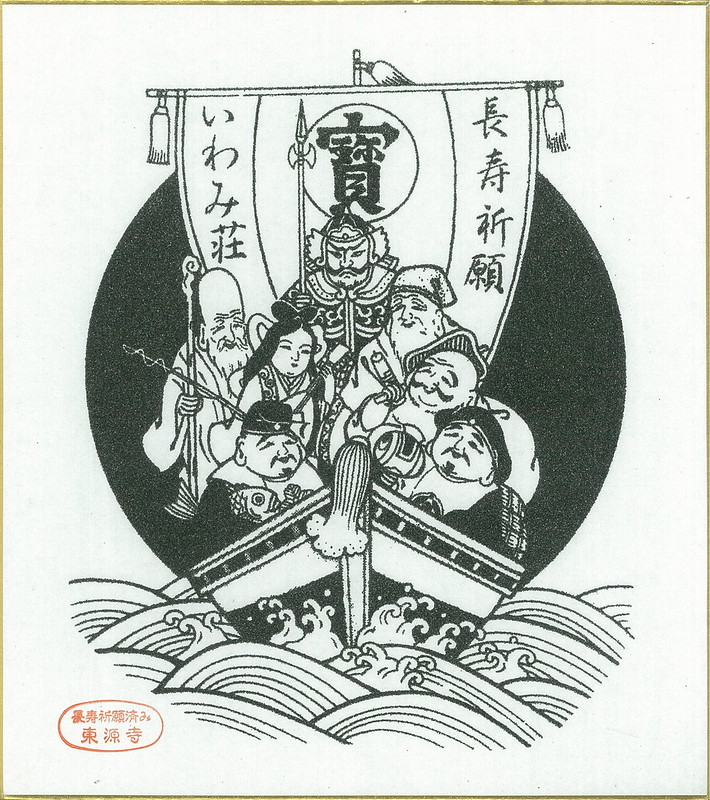 This is a ship that brings treasures to the people. In ancient Japan it could be ships from other parts of the world bringing rare goods but takarabune are also mythological ships bringing treasures from gods or other mythological items.

In the case of the Seven Lucky Gods, it holds the seven virtues attributed to the gods (longevity, fortune, popularity, sincerity, kindness, dignity, and magnanimity), and five or more treasures. These can vary and be called differently. Some examples are a purse that will never get empty, an umbrella which makes invisible, a lucky raincoat, and much more.

To explain the Seven Lucky Gods will take some more time since it is a huge topic.

These gods were adopted into Japanese culture from Indias Hinduism and Chinese Taoism and Buddhism, and one was always Japanese.

The history of the seven gods is not for sure but this is what is known:

All seemed to start with Daikokuten who was worshipped at Mt. Hiei as the patron of the kitchen. Soon, he appeared in a set with Ebisu, the Japanese god which is seen as a patron of the fishermen but is also associated with crops and food in general.

During the Muromachi Period, Fukurokuju, Hotei, and Jurojin were introduced from China and made the seven gods complete.

However, they weren‘t seen as a fixed set. Some of them were regularly replaced by other gods like Kisshōten or Daruma.

Ashikaga Yoshimasa, the founder of Ginkaku-ji and holder of power at that time, was a great supporter of arts. Then there appeared one picture in his surroundings called „Chikurin Shichikenzu“.

The motif of the Chikurin Shichikenzu is well known, appeared a lot in later art (if you are interested, please google it), and shows the Seven Sages in the Bamboo Forest. It is a story from China.

Inspired by this picture, people started to collect figures and pictures of previously named sevens gods.

Daikokuten 大黒天 – god of commerce and prosperity
Patron of cooks, farmers, and bankers, and a protector of crops. He is also seen as a demon hunter. He once was the Buddhist death deity Mahākāla.

Ebisu 恵比寿 – god of prosperity and wealth in business
Patron of fishermen. He is the only god with Japanese ancestry among the seven.

Bishamonten 毘沙門天 – god of fortune in war and battles
Patron of fighters and acts as a protector of important places.

Benzaiten 弁財天 – god of financial fortune, talent, beauty and music
Patron of artists, writers, dancers, and geisha.
Her origin is in Hinduism the Hindu goddess Sarasvatī.

Hotei 布袋 – god of fortune, guardian of children, and popularity
Patron of those who could not be saved by the beliefs of Buddha since he is seen as second Miroku.
Hotei comes from China and his real name is Kaishi. He was said to be a Zen monk.

Jurojin 寿老人 – god of the elderly and longevity
It is said that Jurojin is based on a real person who once lived in China but he is also the incarnation of the southern pole star.

These seven, although Fukurokuju is sometimes replaced by Kisshōten, are sailing with the takarabune and arriving in the worldly harbor on New Year. It is said that those who see their ship will be happy and prosperous. There is another New Year‘s believe: The first dream in the new year will be an omen of how the following year will be. A lot of people putting a picture of the Seven Lucky Gods under their pillow in the hope they will see them in their dream. It is also usual to visit famous shrines depicted to the deities in the first days after New Year. This is called Shichifukujin Meguri and is commonly well-known routes.

This is a stone placed in a Japanese garden that looks like a ship. It can have several meanings.

These are small stones in garden design forming a line in a pond, usually in front of an island or shore.

They are an image of ships bound for Mt. Horai to find its treasures.

Now we have all pieces together!

Commonly seen, the treasure ship is associated with the Seven Lucky Gods bringing luck. The knowledge about them is well spread in the Japanese population which is seen in so-called kumade purchased after New Year which showing a treasure ship, the habit of washing money in Benzaiten Shrines for prosperity, or a group of Tanuki (Japanese raccoon) transforming into the treasure ship in a pop-culture movie.

It seems easy to try to link the ship stones in a garden to this. Especially, since there are stones called „treasure stones“ yodomari ishi already existing, although the tale of Mt. Horai has nothing to do with the Seven Lucky Gods and their takarabune. 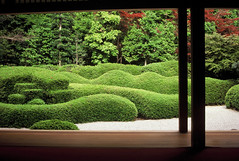 And then there is a garden like the Horai-garden in Daichi-ji temple in Shiga prefecture.. It is said to be designed by Kobori Enshu as a karesansui garden. In a sea of gravel, trimmed azaleas stand for a ship loaded with treasures and seven rocks are an image of the Seven Lucky Gods. This garden brings together the tale of Mt. Horai and the treasure ship of the gods..

The ship stone funaishi 船石, however, has nothing to do with the Seven Lucky Gods in the first place. It is the image of a ship, that‘s true, but it can have a lot of meanings. This ship can be bound for Mt. Horai, it can carry virtues, be an image of life, or, it can be an image of said takarabune. There are no restrictions.

The most famous ship stone might be the one of Daisen-in in Kyoto‘s Daitoku-ji temple.

Nitschke writes that the “treasure boat” stone of Daisen-in represents the accumulation of experience during an adult life.

But these kinds of stones can also be found in many more gardens. Sometimes they are representing a ship loaded with treasures (it lies deeper in the waves of the ocean), sometimes it is only used as a decorative element and mizuboreishi (a stone which holds water) or a chozubachi like in Koishikawa Korakuen or the Nezu Museum of Art.

We only know for sure what a treasure ship means when the story of it or the garden is either well documented or communicated during the ages.

Read more:
Some of the following links are tied to the Amazon Associates program!