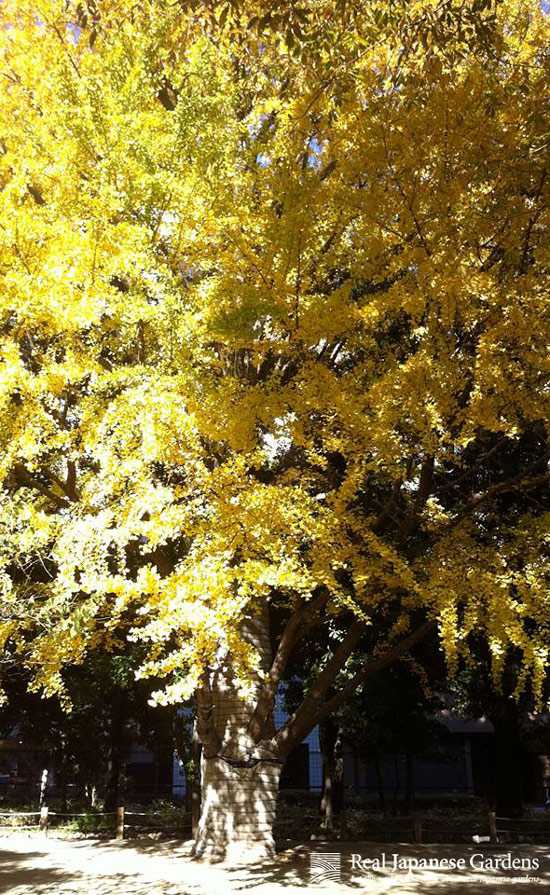 Today I would like to introduce a tree, which can be seen everywhere in Japan.
This blog was a request by one of our readers.

Etymology:
The Kanji were adopted by Japanese from China. Engelbert Kaempfer, who collected illustrations from Japan’s flora while he stayed there in 1690, wrote down “Gin-kgo” for 銀杏. Today we would read it “Gin-Kyou” and indeed is there a misspelling in the name. While Kaempfer normally wrote “kjo” for “kyou”, he has written it “kgo” in case of Ginkgo and the misspelling stayed until today.
There are three different ON-Readings for 杏: NAN, KYOU and KOU.
Why Kaempfer chose KYOU is not sure. Maybe because of the earlier Chinese name “銀果”. Spoken in Chinese, these Kanji sound similar to “Ginkyou”. The meaning of 銀果 is “silver fruit”.

However, in Japan this tree is called Ichou, which has nothing to do with above Kanji. This name actually comes from a different Chinese name: 鴨腳樹 – Duckfoot tree, which derives from the shape of the leaves.

While the Kanji 銀杏 are also used for the tree itself, it more commonly refers to the fruits, which are called “Gin’nan” in Japanese. As you can see, a different ON-Reading is used here.

銀 – GIN : means silver
杏 – NAN : means apricot (the kun-reading is “anzu”, which is an apricot in Japanese)

Another Kanji combination, which can be found for the Ginkgo tree, is 公孫樹 – KOU SON JU.
The meaning of this is roughly translated: tree for the grandchildren and refers to the long time period the trees need to produce their first fruits.

Description:
Ginkgo biloba is a living fossil. It’s natural habitat is China and there only two special regions.
All Ginkgo trees all over the world come from these two places.
The first specimen came to Europe in 1730 through the United East India Company. In America they arrived in 1784.

The trees are neither Pinales nor broad-leaved trees. They are creating an own group. If you look close at the leaves, you can see that it looks like, as if thin needles grew together to form the leaf.
However, the Ginkgo tree is closer to the Pinales than to the broad-leaved trees, although it seems otherwise.

One tree can grow up to 20 – 30m and become over 2000 years old.
There are male and female trees. The female trees grow the nuts, which ripen around October / November.
When falling down, the pulp smells like vomit.
Older female trees grow excesses on the bottom of their thick branches.
The flowers appear during March, but are unimpressive.
Male flowers are allergenic.
The pollination is done by wind, not by insects (similar to most gymnosperms). 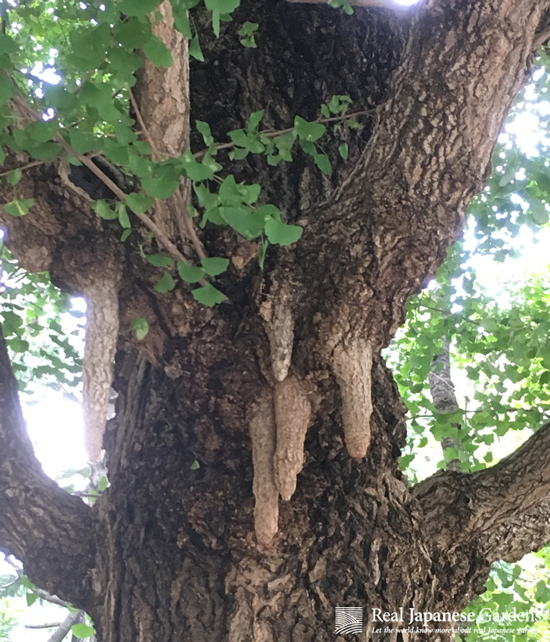 Ginkgo trees are known as very resistant trees. They withstand pollution and salt and are very popular along streets.
However, they don’t like to change places and take long to germinate and cuttings have a low root-building chance.

Because the leaves turn to a beautiful yellow before winter and even stay yellow when they fell on the ground, Ginkgo trees are a very popular “Momiji-gari” (autumn leaves viewing) object.
People in Japan travel great distances to see the best spots with Ginkgo trees.
Very famous is the alley at Meiji Jingu Gaien, which draws the attention of thousands of people every year. 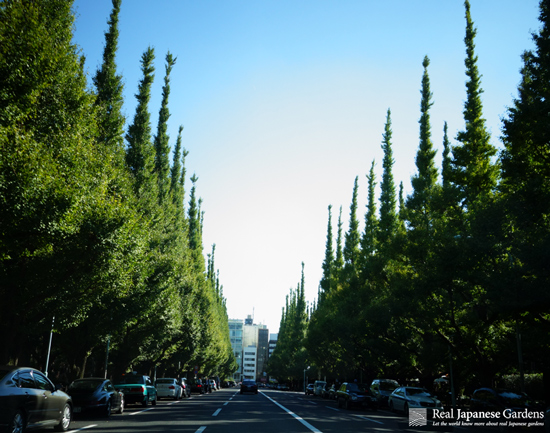 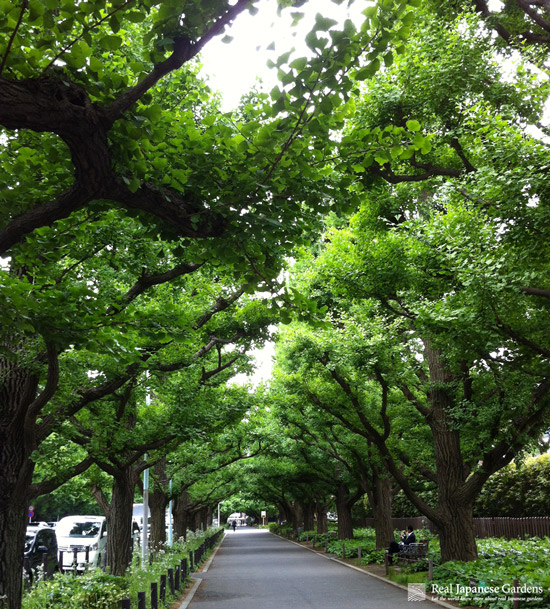 The pyramid-shape is men-made. The natural habit is different.

Usage in Landscaping:
Ginkgo trees are commonly not used in private gardens in Japan.
The trees are becoming too tall and the leaves and probably fruits are creating too much work in autumn.
However, Ginkgo trees are still very popular as trees along streets and in temples and parks.

The leaf of the Ginkgo tree is the symbol for the Tokyo metropolitan region and the symbol of the Urasenke school of tea.

Other cities and region throughout Japan have it as their symbol too and there are even Ginkgo festivals. 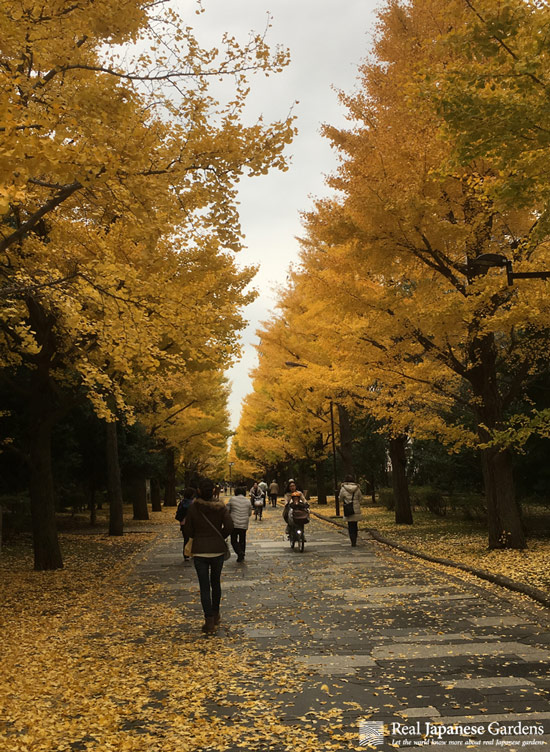 The Language of Flowers:
Although the Ginkgo tree is hard to give as a flower gift, it still has special meanings:
「荘厳」「長寿」「鎮魂」

荘厳 : Sougon – Solemnity | This meaning comes from Buddhism and Ginkgos special meaning as decoration in temples. The trees were planted on temple grounds from ancient times.
長寿 : Chouju – Longevity | This meaning comes from the long time until the trees grow fruits and the time they are able to live: over 2000 years!
鎮魂 : Chinkon – Repose of souls | To calm one’s spirit. 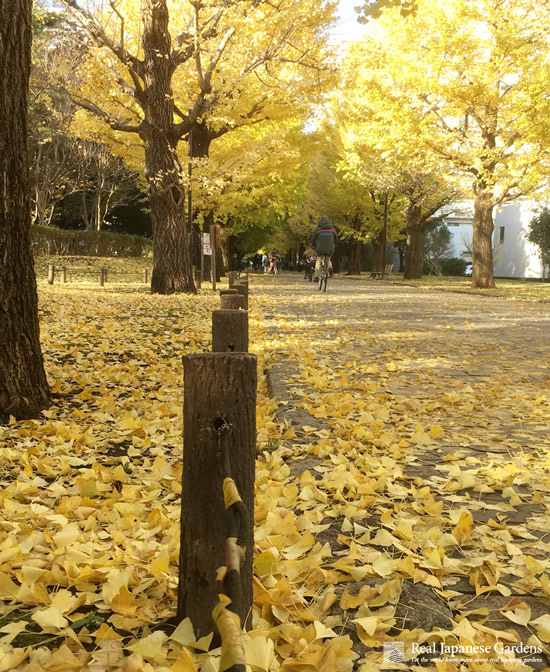 In Medicine:
In todays medicine Ginkgo leaves are used for improvement of the cognitive functions, treating high blood pressure, tinnitus and vertigo.

In traditional Chinese medicine also the nuts and roots are used. The nuts are for cough, bladder infection, asthma and flatulences.
Roots are used by, flatulences, to strengthen the stomach and help by menstrual disorders.

In the Kitchen:
There are some dishes in Japanese cuisine featuring the nuts from Ginkgo trees. You will find them in Chawanmushi, a steamed egg dish, in rice and as roasted snack.
Although you see people collecting the fruits everywhere in November, it isn’t very popular to cook the fruits by oneself because of the heavy smell and the juice in the pulp causing skin irritation. 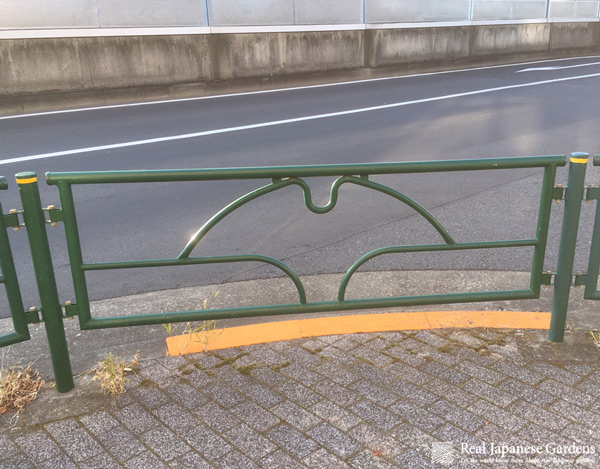 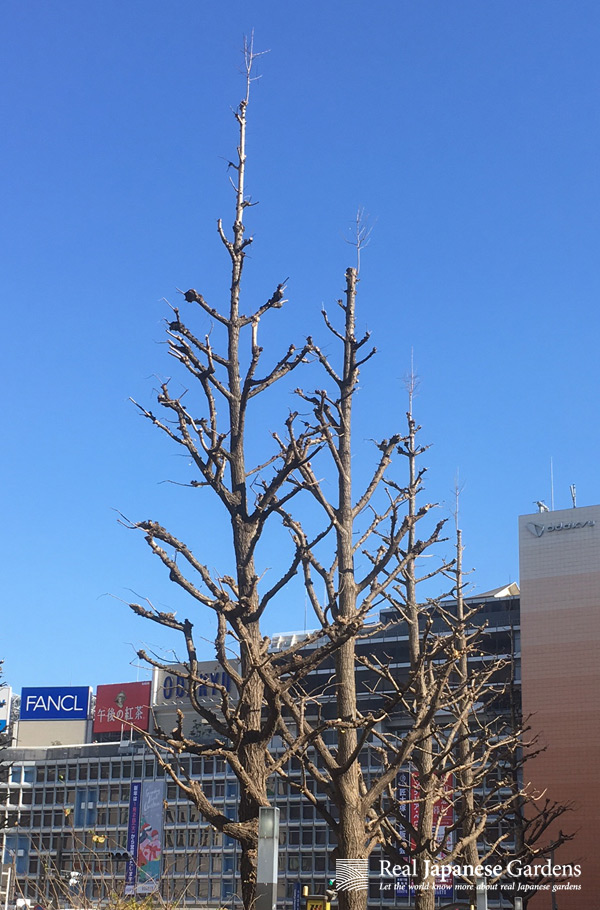 Freshly pruned Ginkgo along a road.