The first time I came in contact with Houttuynia cordata was during my work in the Botanical Garden in Hamburg / Germany.
However, it was not the common one, but the variety “Chameleon”, which is not as vigorous as the normal Houttuynia. Nonetheless, I hated to work inside them because I couldn’t stand the smell when the stems were damaged.
It is the same smell when washing stainless steel pots with a strong sponge..
When I came to Japan, I learned really fast, that Houttuynia cordata is a No.1 weed here. The plants I thoroughly cared for before I now had to rip out..

And sometimes I really ask myself why..

Take this picture for example:
It was taken before and after maintenance at a private university.
Which one do you like better?

Yes, I am thinking the same! The whole area covered with Dokudami is more appealing! Only because it is seen as a weed in Japan, we removed it and made everything ugly brown.

It got the “weed-stamp” due to its great vitality and the very invasive roots. It is said that Dokudami was the first plant to re-appear after the bombing of Hiroshima. The roots are more like rhizomes and from every little piece a new plant can grow (as long as the piece contains an adventitious bud).
When Dokudami once overtook a flowerbed, it is almost impossible to remove it again and it will overgrow smaller plants in an instant.
What makes Dokudami not the perfect groundcover is the fact that it is not evergreen…

So.. in gardens it is seen as weed. However, Dokudami is actually a useful plant with several usages.

The first thing I got to learn was Dokudami Tea (どくだみ茶). One colleague asked us one day to not throw the long plants away, but keep them because he wanted to make tea out of them.
In June / July when Dokudami starts to flower, the whole part above the ground will be taken (40 ~ 50 cm / 16 ~ 20in) and dried outside in a shady place.
When it rains, take the Dokudami inside a room. When it is totally dry, cut it in pieces and store it in a hermetically closed bin.
Dokudami Tea functions as medicine! It shouldn’t be drunk as normal tea! 600cc a day is max and it needs a special technique to brew.
Heat 5 ~ 15g of Dokudami in 60°C (140°F) hot water over 30-60min.
Dokudami as medicine has a diuretic effect, prevents arteriosclerosis and is helping with eczema and rash.

When my colleague was done with drying, I received some of the leaves. However, I once tried it and decided that I was already very healthy…

Dokudami is not only used as tea, but can also be eaten. The strange smell will be removed by heating it up and the leaves are used for Tempura.

Today it is also often used in the cosmetic industry, especially in Korea.
It can be used as a treatment against acne, for cleaning the skin and skin regeneration.
It also seems as if in Korea Dokudami is not only used for tea, but also for juices and fermented liquor. 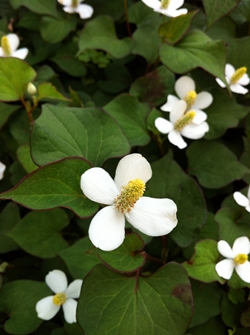 Maybe it is time to change the image of Dokudami in Japan and try to include it in new designs of flowerbeds where Dokudami is already existent.
This may be easier than to try to get rid of it, because when failing, it will cause much pain to the customers, who need to do regular maintenance afterwards to pull out every new sprout of Dokudami appearing.

I will see this as a new challenge on my way to make Tokyo’s gardens green again!

Soil: moist to wet soil, can also live inside water, light acidic
(I already saw it in Japan at very dry places as well..)
Place: shade to sun
USDA: 5a – 11

Support our Work on Patreon
klick for more info