Although Hydrangea’s season is almost over, I would like to highlight this flower in a blog.
In Japan, Hydrangea is closely connected to the rainy season in June because it flowers at this particular time of the year.
But don’t fear that you can only enjoy the bright colors in the rain!
Japan’s rainy season is not of consistent rain, we also have sunny days ^_-

Hydrangea macrophylla
This is the Hydrangea we normally know and call “Ajisai” (アジサイ / 紫陽花) in Japan.
It has great flower balls in all shades between pink and blue.
This color variety depends on the acidity of the soil and the amount of aluminum. It can directly be influenced!
The color is pink in alkaline soil, but with the right acidity (pH 4.0-4.5) and for example an aluminum fertilizer it is possible to turn the color over to blue.
(This also works for H. serrata, which is used in Japan for a special tea – Amacha.)
Hydrangea prefers humus soil and a place in semi-shade or sun. However, it can also survive in full shade.
Best is a light shade under high trees.
The USDA ranges from 4a – 9b.
Please make sure that H. macrophylla always has enough water. You can see asap if the water is not enough, because the leaves will hang down. It is possible for Hydrangea to survive hot summers (in Japan, there are months of 40°C – 104°F without rain for weeks), but this weather is not perfect for its cultivation. If the soil is not humus and cracks easily in hot weather, it is necessary to work organic matter into it before planting Hydrangea.
Most varieties of H. macrophylla are flowering on the old stems. Pruning should be done right after the flowers are done or in early spring.

Hydrangea hirta
This Hydrangea, in Japanese “Koajisai” (small Ajisai コアジサイ / 小紫陽花) can especially be found in the mountains.
It has very tiny but beautiful flowers and flowers a little bit earlier than H. macrophylla.
The color can vary between light purple and white. The leaves will turn to a pretty yellow in autumn.
Due to its totally different appearance and the nice smell of the flowers, it adds a special touch to a garden. 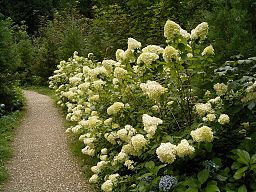 Hydrangea paniculata
In Japanese Noriutsugi (ノリウツギ / 糊空木).
Among the mentioned Hydrangea, this one is the most drought tolerant one. However, it likes the same conditions as the two above.
H. paniculata is flowering on new stems, which means that pruning in spring before the new leaves appear, will lead to a better and richer bloom.

The flower language of Hydrangea:

There are several meanings to Hydrangea macrophylla in Japan and not all of them are truly Japanese. However, I would like to introduce them to you nonetheless.

Unfortunately, they are also not all positive.. But the positive ones definitely outdo the negative ones :)

Let’s forget about the negatives and let us move to the positive meanings!

These were the main meanings of Ajisai we can find in Japan. Of course, there are some more minor meanings here and there, like “humility” for H. macrophylla var. normalis (ガクアジサイ) or tolerance for white flowering Hydrangea.

Of course, I also searched a little bit in my own language.. Most of the meanings in Germany are not very interesting except for one:

I hope this small excurse was interesting for you!
-Anika

Please share your personal experience with Hydrangea in your climatic zones in the comments!

Support our Work on Patreon
click for more info

8 reasons why you should visit Japan during the rainy season!

The most popular plants in Japanese private gardens

2 responses to “Hydrangea and it’s language”